skip to main | skip to sidebar

Stay Centered Through the Winter

For those of you who haven't joined us for yoga and pilates, we encourage you to come hit the mat. We just added four new classes to help the community stay strong and centered through the winter months, including a Pilates for Surfers core strengthening class twice a week and Chocolate Yoga on Wednesday evenings, offering a spicy cacao beverage to comfort you throughout class. 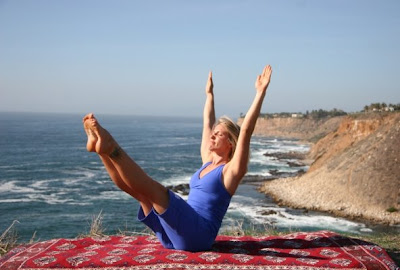 Paradise offers four weekly classes:
Express your gratitude for the gift of yoga by making a $12 donation for each class. However, we are here to serve the community so no one will be turned away for lack of funds.
Special Note: Class will be cancelled Saturday Feb. 13 and Monday Feb. 15 in observance of Valentines Day and President's Day.
We look forward to growing together through practice.
Namaste,
Women of Paradise
Posted by Paradise Surf Shop at 3:36 PM No comments:

This Krochet Kids hat will warm your heart as well as your ears. Stitched with love by women in Uganda, your purchase will not only upgrade your style but also empower and support impoverished communities in Africa. Sweet deal! 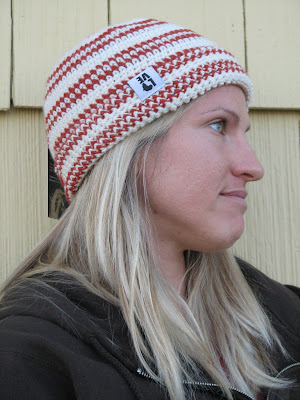 Paradise's Marion Clark contemplates the impact of the hat she's sporting.
Available in "waldo" or gray in the shop or at the Paradise online store.
Posted by Paradise Surf Shop at 5:21 PM No comments:

Comfort from the Storm

Spend these rainy days comfortably at home in a new long-sleeve! Perfect for layering under sweaters or sporting over a spaghetti-strapped tank. This soft, slinky burn-out is soon to become your favorite shirt. 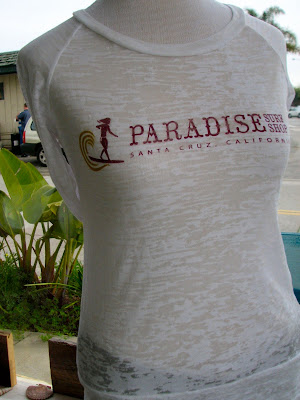 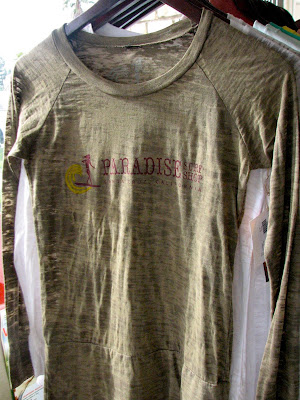 Posted by Paradise Surf Shop at 4:40 PM No comments:

One Scarf, Many Looks

Wrap, criss-cross and tie this baby to your heart's delight! Dress up your winter wardrobe with a sophisticated scarf, rock the classic tube top or pack this wrap to wear as a sarong-like bandeau on your next trip to Mexico. Oh the possibilities! 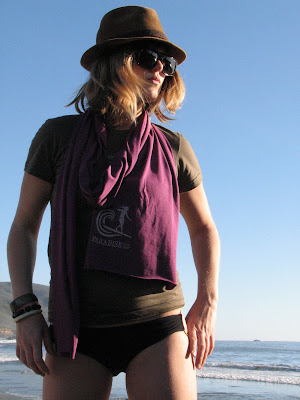 Buy it in the shop or at the Paradise Online Store.
Posted by Paradise Surf Shop at 3:01 PM No comments:

A New Year of Yoga

Whether you've re-dedicated yourself to leading a healthy lifestyle or committed to spending more time in silent reflection, yoga is a wonderful way to start off the new year in physical activity and meditation. Yoga classes with surfer-yogi Marion Clark will return to Paradise Surf Shop this winter season every Saturday morning from 8:30-10am, with the exception of this weekend in which yoga will be held Sunday Jan. 10.
Clark teaches an all-levels vinyasa flow class which uses pilates and surf influences to promote core strength, balance, deep breathing and meditation. Classes are by donation. See you this Sunday!
Posted by Paradise Surf Shop at 5:34 PM No comments:

Kick off the holiday season with Nava Young, the Australian pro longboarder, musician and author of Surf Food – The Ultimate Surfer's Cookbook.
Come to the Book Release Party at Paradise Surf Shop!
Tuesday, December 8, 2009 from 6-8pm
Enjoy a fun evening of light food & drink and an acoustic performance by Nava herself.
Get your copy of Surf Food signed – they’re perfect gifts for your favorite surfer. Ten percent of book profits will
be donated to surf-related charities. 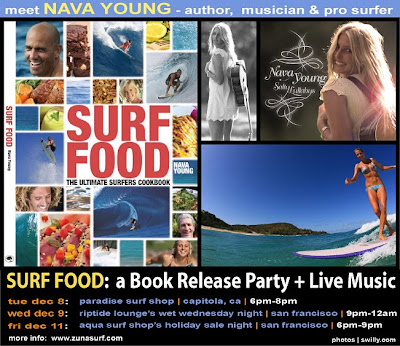 Surf Food is a collection of mouthwatering recipes from the world’s best surfers, including 25 World Champions and icons such as Kelly Slater, Laird Hamilton, Nat Young (Nava’s dad), Stephanie Gilmore and Donald Takayama. Without a doubt, these surfers seek out good food with the same relish as their quest for the perfect wave. Featuring
informative biographies, over 180 photographs and dishes from all over the globe, this book will keep you both entertained and well-fed.

Raised in a surfing family on Australia’s East Coast, Nava is currently ranked second in the Australasian Longboard Qualifying Series and will be competing among the world’s best in the 2010 Women's Longboard World Circuit Tour. This year, Nava also released her debut music EP, Salty Lullabies, a collection of self-written songs. Her musical influences include Ben Harper, Jack Johnson, Tracy Chapman and The Rolling Stones. Surf Food is her first book.
More info: www.surffood.net | www.myspace.com/navayoung | navayoung.blogspot.com
Posted by Paradise Surf Shop at 3:22 PM No comments:

Starting this Friday Nov. 20, Paradise will host one movie night per month, free and open to the public. This Friday, we'll kick off with Surf's Up, a kid-friendly animated movie (also very funny for adults) about up-and-coming penguin surfer Cody Maverick's and his first pro competition experience on Pen Gu Island.
Set in a documentary-surf style with penguin appearances by the likes of Kelly Slater and Rob Machado, this movie is fun for the whole family.
When: Friday, Nov. 20 at 7pm
Where: Paradise Surf Shop
Tea and beverages will be provided.
Bring a pillow and blanket!
Posted by Paradise Surf Shop at 11:47 AM No comments: